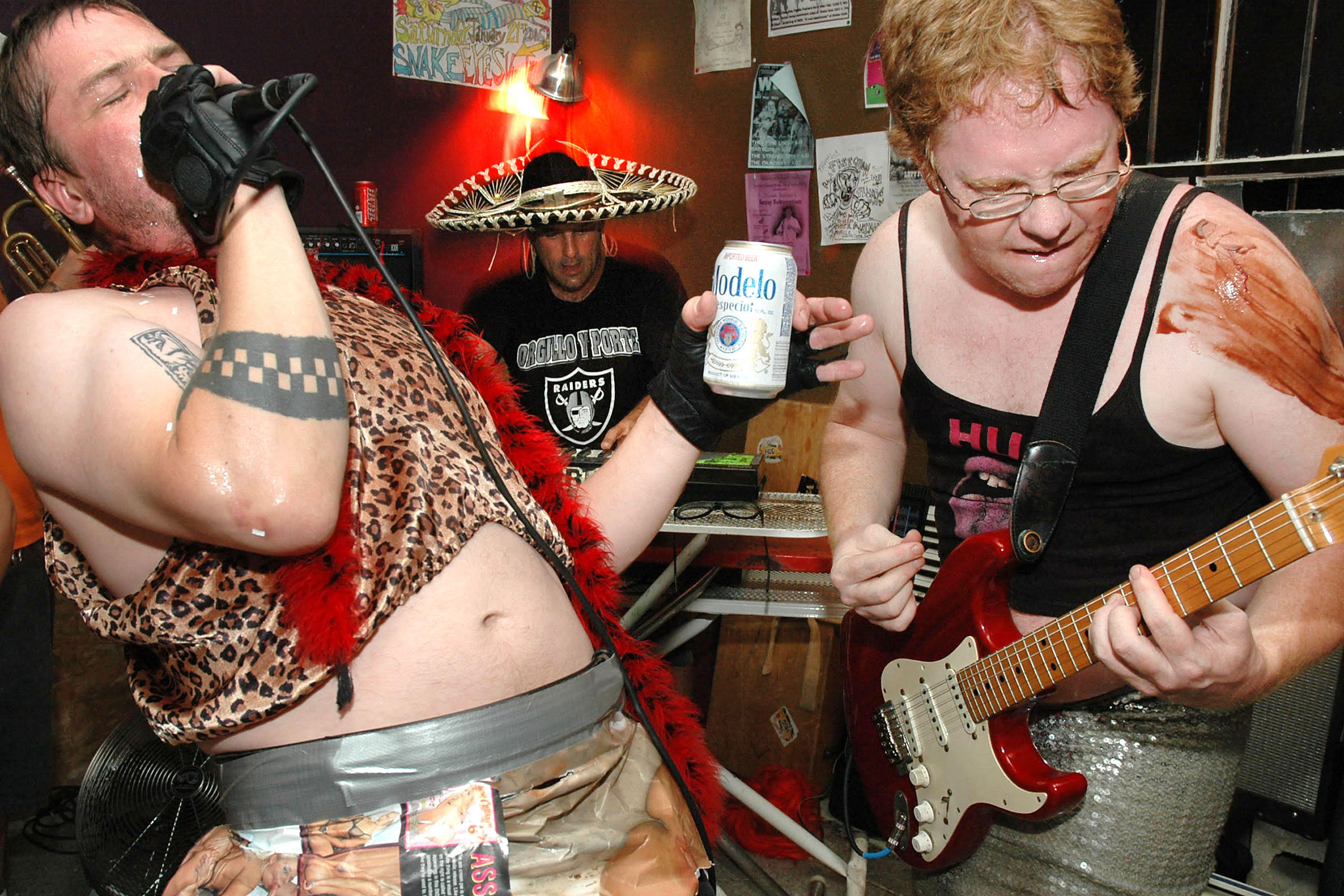 This Party Sucks. by Skip Friday

Marijuana related incarcerations number in the hundreds of thousands. Extreme religious factions and other fascist power mongers lord over our individualistic beliefs. It is so uncool.

But don’t freak out. Worry not my wayward sons and daughters. Our Fairy Rawkmother has told me a little birdie secret that’s gonna make everything alright!
BREAKING NEWS

Once upon a time there is HUG. Dirty. Raunchy. Carnival Circus music AND a super salacious especially sexy side show.

“carnival music: yeah, the basis of our stuff is old casios and such, so cheesy beats and baselines are a big part of it, so then to rock over that multiplies the silliness.” – Blair.

I asked Christian Eason, cofounder of Austin based label Foreign Object Damage, what exactly he thought that Blair was talking about. Christian decided to talk about something else instead .
“These three terms: pastoral death (aka nightmare sauce), psycho-ambient, and raw unorthodox black n’ roll are the ones that came up in my mind from your question. If you can think of more, I wouldn’t be surprised. Of course most of them are rooted in in-jokes…….”
#stayfreshcheesebags

Janine de Luna Azul had something more relevant to say.

“To answer your question:
During the end of the summer of 2005, I was approached by “Dorito Valdez” one of the HUG Dancers, portrayed by Edmo Martinez an Austin artist asking me if I would like to join him as a HUG Dancer. The dancers are the accompanying side show act- hype clowns if you will who instigate chaos while the band plays and engage the audience into participating with the band.
At the time, the end of the summer of 2005 I’d just finished the run of a comedy showcase called The Austin Live Show. I was looking to get involved in another performance art project. Performing as a HUG Dancer hype clown was right up my alley. “

We Are The Asteroid. This Party Sucks. All Monsters Attack.

Blair Bovbjerg is the lead singer of HUG…

“favorite part of HUG experience: as a writer i like it when a story comes together, or a line pops out with precision, and those things can happen in complete solitude, or in a jam session with the crew. But then there’s the other (completely opposite) dimension of the act, the live performance, and when everything goes right those can turn into really fun, absurd, reckless parties. Maybe-just-maybe with a little catharthis/introspection at some point. Who knows. that’s a blast. “

Speaking of blasts! The Umpteenth Fish Fry starring The Pocket Fishrmen was freaking out of this world this year! Oh. My. God. Probably the Event of The Century! It rocked hard!  So much talent!

Sunday May Fifth at The Hole In The Wall in Austin Texas. Did you miss it? Did you blink? Don’t worry. There’s always next year.
Patrice Pike is a safe bet. Go see Mike Dillon when he’s in town. Pyrethrum is very loud.
I was in Rochester, New York on two separate occasions this year. I saw the Suspirians on their tour in August and I saw Scotty B on his tour in March was it? We got stoned in the basement of The BugJar whatever that means. Yo Bobby, what’s up?

WFMU 91.1 fm is probably the most fantastic rock & Roll radio station on the face of the planet. Tune in weekdays 6-9 am eastern standard time before you try to prove me wrong.

Have you heard the Pure Hell album “Noise Addiction”?