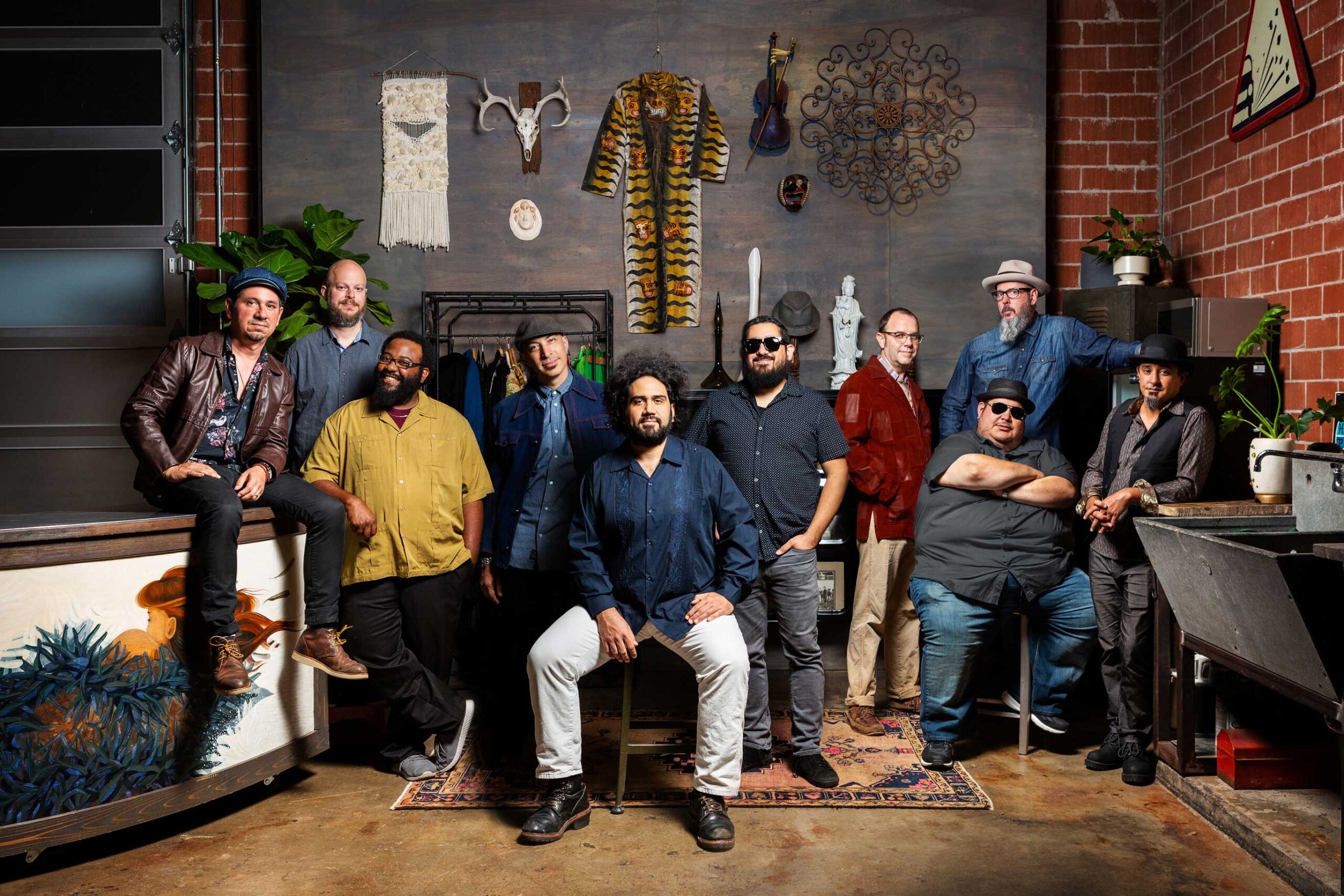 BERLIN SESSIONS IS OUT MARCH 6, 2020 ON FAT BEATS RECORDS

Brownout’s legendary status as a “Funk Powerhouse” (Stereogum) is a reputation well deserved. The band of musicians have an impressive resume performing with Prince (RIP), GZA of the Wu-Tang Clan, Bernie Worrell (RIP), and accolades from Ozzy Osbourne for their Brownout Presents: Brown Sabbath project. The latter helped grab the attention of Fat Beats Records, who worked with the band to release the critically acclaimed Public Enemy instrumentals project Fear of A Brown Planet in 2018. The Austin 9-piece is back with their first full length album of original music in over 8 years. The album, aptly titled, Berlin Sessions (out March 6, 2020 on Fat Beats) was produced by Steve Berlin of Los Lobos and is the first with lead singer Alex Marrero, whom they originally collaborated with on their wildly successful Brown Sabbath records. Berlin Sessions finds the group merging a multitude of styles, from rock to psych and of course the Latin Funk and Breakbeat on which they have built their sixteen-year career and reputation as Austin’s premier party-starters.

NPR recently featured the band on their heralded “Tiny Desk Concert” series, performing songs off the new album. NPR described the diversity of the band, stating, “One of the things you need to know about this band is that they can change traditions or genres almost on a dime. The core members dip into soul, Latin funk, a form of Peruvian cumbia called chicha, and funk covers of both Black Sabbath and Public Enemy. What each configuration has in common is the almost telepathic bond the band has developed after 15 years of working stages across the country. As you can see on the video, it’s so infectious that Prince once used them for a while as a back-up band.” Watch the full performance here (https://n.pr/2upzrwV).

The album evolved shortly after recording Fear of a Brown Planet during the hot Texas summer days in Brownout guitarist Beto Martinez’s Lechehouse Music studio located in Buda, TX. With only an AC window powering the room, many takes were done with the AC off in 90 plus degrees. The recordings captured the enthusiasm, sweat, and swiftness of a band eager to record their first set of original material in some time. Beto adds, “The ideas came swift and there was much experimentation in recording techniques and instrument usage. Steve Berlin was very hands on with implementing new sounds and tones through effects or otherwise. I not only played on the record but recorded it at the same time. After placing mics and setting the recording gear, I had to play parts I had either just written or just learned all while watching meters and the tape machine to make sure it was all recording correctly with Steve Berlin sitting directly behind me. It was a nerve wracking and trying experience, yet a very fulfilling learning process.”

With Alex as the full time vocalist for the band, Berlin Sessions adds lyrical depth and themes that the instrumental albums don’t exude. Alex explains, “As I started writing lyrics for Berlin Sessions, I noticed there were more abstract yet universal themes. Writing in a way that doesn’t spell everything out directly. They can mean anything to anyone depending on what they need it to. Although seemingly ambiguous, all the songs ended up having a lyrical thread and thematic connection of stepping outside of your physical realm and connecting to a more universal energy.  Fighting for your individuality. Healing and processing our human emotions, connections and turmoil with a sense of awareness that we are still connected to something outside of what we consider ‘physical reality.’ It’s about overcoming your problems, the cards you’ve been dealt in life or just enhancing your personal connections by acknowledging we cannot be defined strictly by how the material world has laid ‘reality’ out to us; especially not societal norms and expectations. There is a bigger truth we just keep forgetting to look at. I don’t mean religion, I mean energy.”

That energy is captured throughout the eleven songs, kicking off with “Somewhere To Go,” the lead single, tackling complacency by taking chances in one’s life. The track is accompanied by a cosmic illustrated video directed by Eduardo Xavier Garcia slated to drop in mid-February. “Naín” (pronounced ‘nah-een’) will be the second single with its moody vibe sung in Spanish by Alex. He describes, “The name comes from biblical times and means ‘a person of great spirit and beauty.’ It’s a name commonly used for gender neutrality. So, it’s the story of Naín, a young person who does not fit within the small minded framework of their birthplace. They are not accepted or understood. It’s about the struggle and pain in being different and their subsequent triumph against prejudice and adversity to shine as the individual they knew they were from day one.”

The breadth of styles on the tracklisting include the Pink Floyd meets Zeppelin sounding “Seamus” to the New Orleans street carnival vibes on “Fill My Cup,” to the cosmic soul of “Upon This Rock.” The final track “After November” started as an improvisation between Brownout bassist Greg Gonzalez and Alex Marrero on drums. Greg elaborates, “The whole thing reminded me of some Ennio Morricone meets David Axelrod type adventure. When we finally got to track the song our newest member/keyboardist Peter Stopchinski arranged some wonderful violin parts and our horn arranger Mark “Speedy” Gonzales contributed mariachi trumpets and French-horn like trombones to tie the whole thing together nicely. Alex adds, “It’s such a cinematic track, it feels like something out of a bad ass movie. A perfect album closer.”

Brownout will be celebrating the Berlin Sessions album release with a pair of shows at Austin’s 3TEN ACL Live on Friday, March 6 and Saturday, March 7, with more national dates to be announced. When it comes to touring, Alex concludes, “I think the history and evolution of this band is being captured and showcased well in our live shows. We’re perfecting the marriage of the instrumental catalog of the band and the newer material where I can step away from the percussion and serve as full-on front man for the songs that require it. It makes for an exciting live performance.”