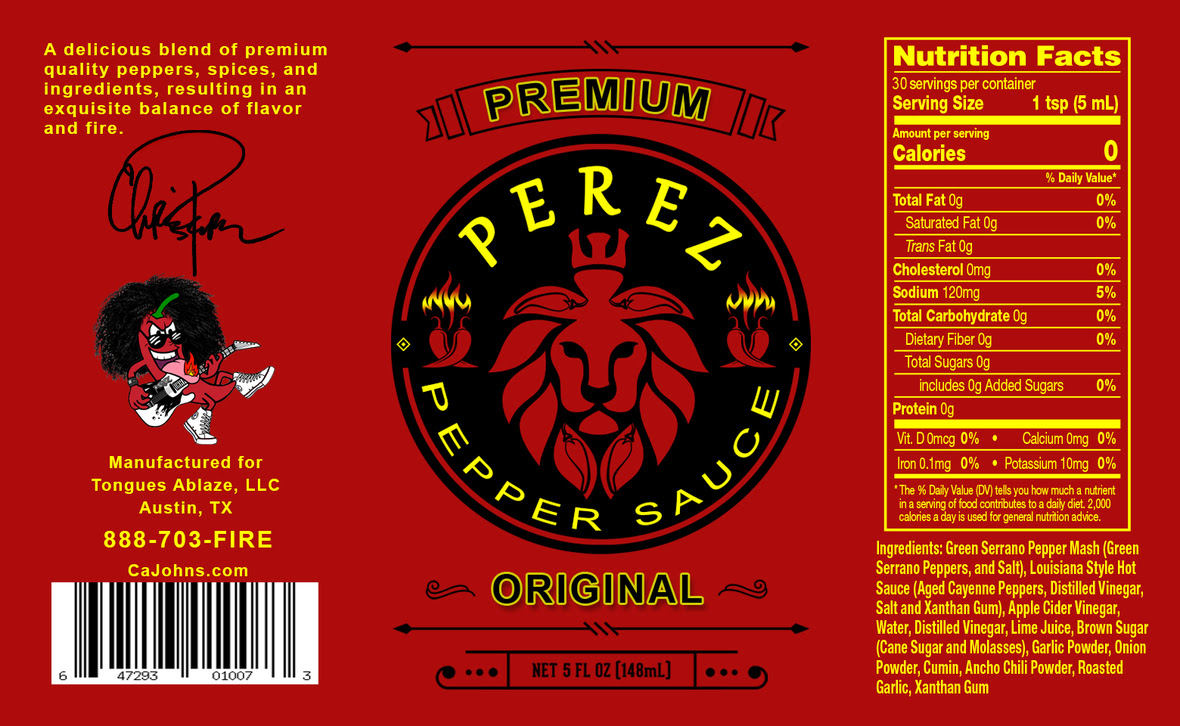 Chris Perez, husband to the late superstar, Selena, dubbed the ‘Queen of Tejano music,’ released his custom “Perez Pepper Sauce” on Saturday, November 16th. The small-batch sauce will be available online at CaJohns.com and at select locations where Perez will make personal appearances to offer on-site demonstrations to fans and customers.

“My love for spicy food began as a young child when I accidentally ate a Mexican chili pepper,” recalls Chris. “I guess you could say that’s when I had my jalapeno popped,” laughs Perez. A scene from the 1997 biopic “Selena: The Movie” (portrayed by mega-star Jennifer Lopez) showcases Chris’s (played by actor Jon Seda) love for hot sauce, which remains strong to this day. See clip here: https://youtu.be/OmXqVW7Ux7s

Fast forward to August 2019, and Perez’s passion to create his own hot sauce brand started to become a reality. When he and his long-time friend John Gomez were eating dinner before attending a Dallas Cowboys football game together at AT&T Stadium, Gomez noticed that Perez was carrying chili peppers in his tote bag. That was when an idea was planted. While hanging out on the sidelines prior to the game in the company of legendary players Michael Irvin and Emmitt Smith, Gomez casually said, “You should create your own hot sauce, Chris, I can help you. What’s better than football, beer, hot sauce, and chicken wings?” A spontaneous brainstorming session ensued, engaging the minds, talents, and creative energies of the two friends. Soon after, a partnership between Perez and Gomez was formed, called Tongues Ablaze LLC.

John Gomez is a successful talent manager/entrepreneur with twenty-five years’ experience in Entertainment, Music, Sports, and Drama. He’s worked closely with a vast network of key influencers and decision makers and has represented multi-platinum artists of all genres- Grammy winners, Rock & Roll Hall of Famers, Hip Hop and Rock legends, Pro Sports Athletes, and artists at various stages in their careers. Knowing how important it is to take potential investors’ personalities and business reputations into consideration when seeking seed money, Gomez reached out to his good friend and business partner, Marc Colombo, to help fund the new hot sauce venture as an angel investor. Colombo is a former American football offensive tackle who played for eleven seasons in the National Football League for the Chicago Bears, the Dallas Cowboys, and the Miami Dolphins. He is the current Offensive Line Head Coach for the Dallas Cowboys.

To produce and bottle “Perez Pepper Sauce”, Gomez and Perez worked with the masters at CaJohns Fiery Foods to develop Perez’s original pepper sauce that will be a delicious blend of premium quality peppers, spices, and ingredients resulting in an exquisite balance of flavor and fire. “Even though ‘Perez Pepper Sauce’ will just be one offering for now, as business expands, the aim for Tongues Ablaze LLC is to be a one-stop shop for different kinds of hot sauces, BBQ sauces, salsas, rubs, and snacks with a distinctive and unique taste,” says Perez. “In the past, there were only a few segments of the society that appreciated and used hot sauces with the same big hot sauce brands cornering the market for years. However, this has changed as hot sauces have now hit the mainstream market with Global market projected to reach a value of US$5.5 Billion in the next 4 years, so for prospective entrepreneurs, there is no better time to come into the market than this time when the industry seems to be on an upward trend,” says Gomez.

“Hot sauce is now considered the sexiest of all condiments, straddling the line between pleasure and pain, and people have increasingly become interested in sampling new sauce taste sensations. I want to hopefully shake things up a bit by offering sauces and products that are ethnic or culturally inspired from various regions such as Mexican and Spanish sauces among others,” Perez adds.

“Chris’s passion for spicy foods and his entrepreneurial spirit is what made me keen to start a salsa company with him in the quest to become a successful hot sauce business. Chris also has a strong Social Media presence with over 800k Facebook followers and 365k Instagram followers. As we all know, Social Media is increasingly more important in today’s marketing world. If you have a solid following on social platforms, it’s proof that people have an interest in you, your relevancy, and how you can carry a brand to the world. I believe Perez is set to be a market influencer and will have a great impact on the market,” says Gomez.

“It’s always been a life-long dream of mine to launch my own hot sauce brand and enter into the fiery foods industry, so I’m very excited to be releasing my signature hot sauce,” says Perez. “For those of you that don’t know, I’m a Leo, so for the logo of my new hot sauce brand I wanted something that was reflective of my personality. I went with a lion’s head surrounded by some peppers ablaze, and appropriately named my sauce ‘Perez Pepper Sauce’. The lion represents the King of the Jungle, and just like Budweiser is the King of Beers, maybe one day ‘Perez Pepper Sauce’ will be the King of Hot Sauce! That’s the dream anyway,” concludes Perez.

Starting Saturday, November 16, 2019 “Perez Pepper Sauce” will be available for purchase online worldwide at CaJohns.com. On the same day, between 2:00pm-5:00pm, Chris Perez will be making a personal appearance at Traders Village, the largest weekend flea market in San Antonio and West Texas. Perez will be selling bottles of his new “Perez Pepper Sauce”, meeting with fans, and signing autographs. For more info: TradersVillage.com

In addition to launching his own hot sauce brand, after a long absence, Chris Perez and his band ‘Chris Perez Project’ will return to the Valley for a ‘One Night Only’ concert. CPP will perform at The Historic Cine El Rey Theater in McAllen, Texas on Dec.14, 2019. Tito’s Handmade Vodka will host this special concert and the first 100 people to buy tickets and come to the show will receive a free bottle of “Perez Pepper Sauce”. For tickets and more info visit: ChrisPerez.SimpleTix.com