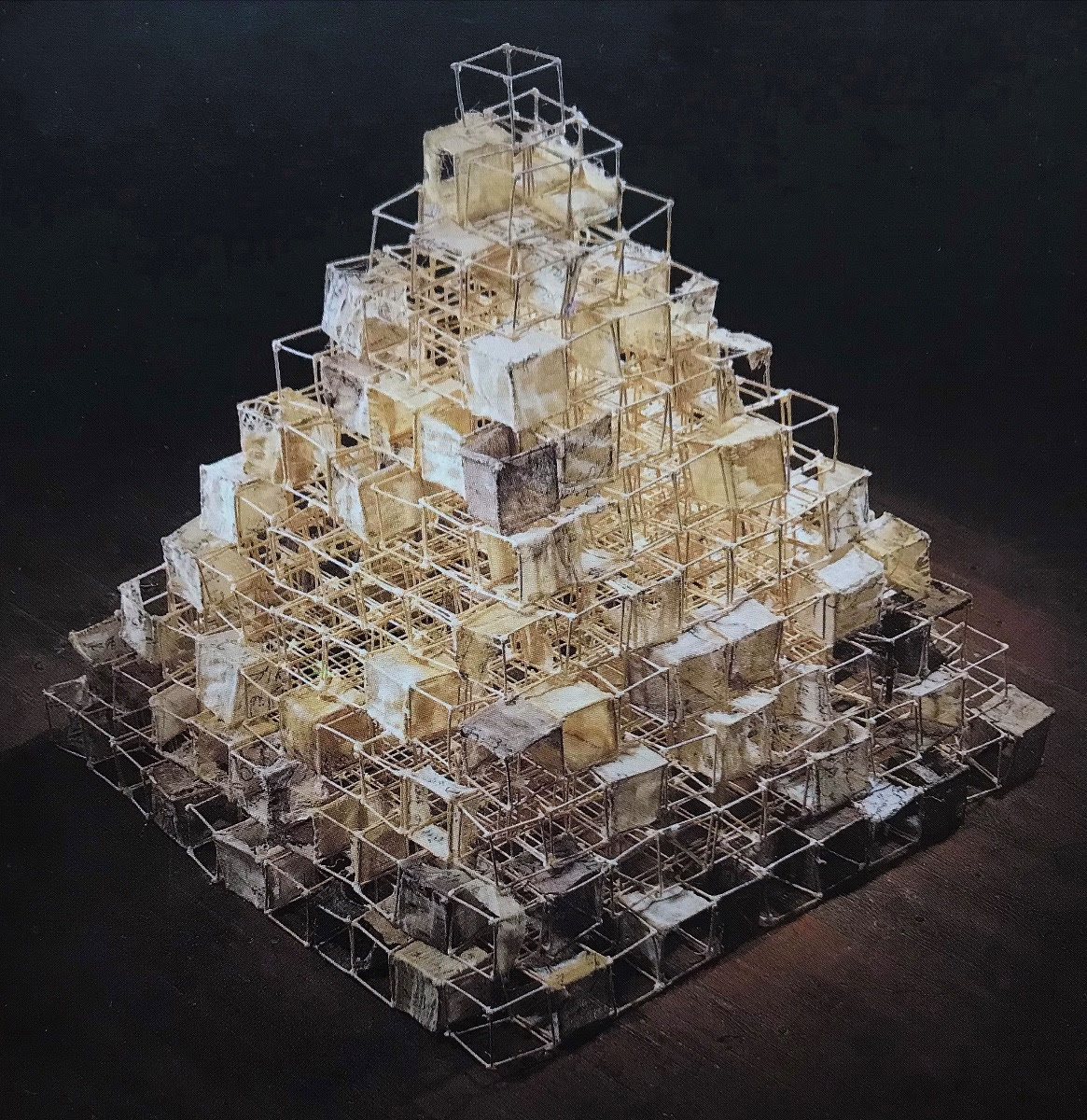 With The Memory Palace solo exhibition at the Big Medium Gallery, artist Rehab El Sadek conceptualizes a meditative journey through personal past and the ancient world. Drawing inspiration from classic architecture, modern architectural theory, world literature and historical texts, El Sadek explores themes of immigration, belonging, communication, and language through a re-examination of the path that brought her from Alexandria, Egypt to Austin.

In certain ways, The Memory Palace is a retrospective—but not in the conventional sense. Utilizing a centuries-old mnemonic technique known alternately as the Method of Loci or the Memory Palace, El Sadek meditated on forgotten places from her childhood and difficult moments from her past as she meticulously constructed the 420 individual wooden cubes that together comprise Haram Xafra, a unifying sculptural work modeled after one of the Pyramids of Giza. To develop the handwritten text on the fabric scattered throughout the exterior of the pyramid, El Sadek translated bits of author Italo Calvino’s meticulously-structured 1972 novel Invisible Cities into Arabic, adapted the narrative to incorporate elements of her own past, then gave the resulting narrative one final translation into sculptural form. The result is an impressive 6 foot by 6 foot tower structure—at once, fragile and imposing—each modular unit imbued with personal meaning.

Although the Haram Xafra pyramid is literally a “memory palace”, it is not the titular work of the exhibit—that honor is reserved for a smaller sculptural object that also explores the intersection of architecture, books, and personal past. Resembling an antique tome clad in intricately-patterned black bookcloth, the drawings on the “cover” of The Memory Palace individual work are adapted in part from architectural plans for a mosque developed by El Sadek’s paternal grandfather. In true Egyptian fashion, this is a collaboration that spans time and space, the living world and the afterlife. With the works developed for The Memory Palace, El Sadek’s first solo show in North America, the artist aspires to create a pattern language rooted equally in contemporary, conceptual art and the ancient past.

Rehab El Sadek is a painter, photographer, printmaker and installation artist with an established social and artistic practice. She has initiated workshops and creative interventions on issues ranging from women’s rights to children with disabilities. A native of Egypt now based in Austin, El Sadek has created work in locations as far as Africa and Pakistan, and as close as Dallas. She has exhibited in galleries in Amsterdam, London, Rome, LA, and Cairo, among other locations.

In 2017, El Sadek was named the City of Austin’s first Artist-in-Residence, exploring environmental and social issues embedded in the city’s Watershed Protection Department. In 2019, she will be participating in the Art Omi Residency (Ghent, NY).