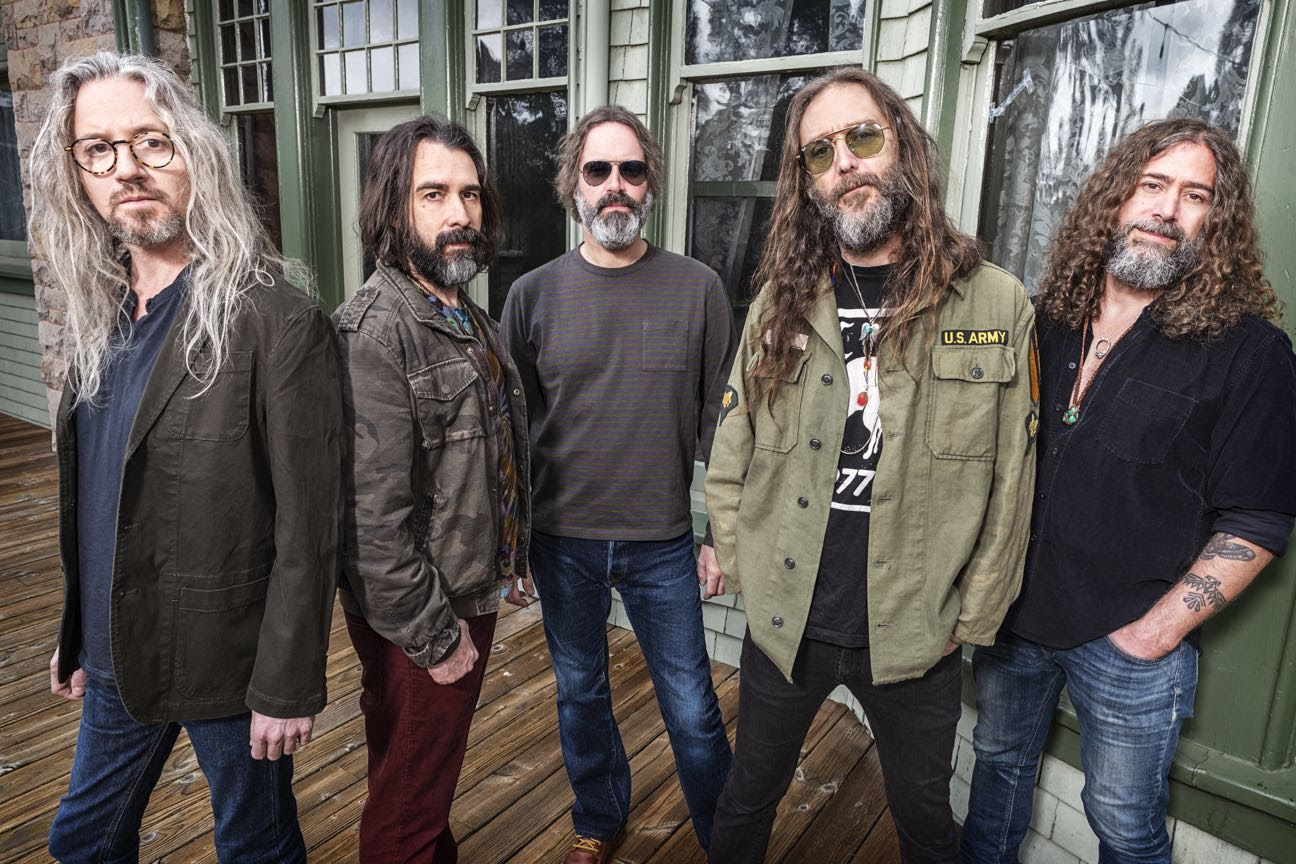 Chris Robinson Brotherhood have announced their latest studio album ‘Servants Of The Sun‘ will be released June 14 on Silver Arrow Records. The CRB’s sixth full-length recording since forming in 2011 finds the band setting aside the studio explorations of more recent work, instead coming full circle to deliver their most direct, bare bones, rock and roll offering since debut companion albums ‘Big Moon Ritual‘ and ‘The Magic Door.’ Hear and share the first single “Comin’ Round The Mountain” out today on all streaming services.

“I let my head go to a Saturday night at The Fillmore, and said, ‘what’s the best set we could play?'” says Robinson. “The record was conceived from that starting point. With our last couple of albums we made songs we knew we probably weren’t going to play live. This time around every one of these songs will fall into the live repertoire.”

Bottling the CRB’s pure essence into 10 new songs, ‘Servants Of The Sun’ bursts into the clear blue air with the funky upper atmosphere bubbling of vintage keyboards, sky-climbing guitar lines, driving rhythm and the voice of one of rock music’s great singers. A gateway swings wide open to a universe that the Chris Robinson Brotherhood has been tirelessly constructing for eight years through extraordinary musicianship, epic touring and a roving, seemingly bottomless wizard’s chest of sonic delights.

“The best thing about the CRB after all this time is that no matter what we’re going through, when there’s a new piece of music that everyone is interested in, the entire band gets in there and goes for it,” continues Robinson.

The major themes of ‘Servants Of The Sun’ are experienced in a constant swirl within the CRB sound. There’s the uptempo ramble and strut of “Comin’ Round the Mountain” juxtaposed against the surreal on “Venus In Chrome.” There’s redemption through love on “The Chauffeur’s Daughter” set alongside the ominous poetry of “A Smiling Epitaph.” “Dice Game” is an exquisite slice of blue country, while “Let it Fall” sashays with fond homage to the slinky rhythms and stoned, but sizzling energy of Little Feat and New Orleans soul-funk. The album captures Robinson and company hurtling between the fire and mania of Saturday night and the bruises and rain-on-the-bus-window reflection of the cold Sunday morning dawn. Beyond the bullet holes, red-eyed angry angels, alchemy, praying mantises, hangovers, and all other manner of cosmic debris gone lyrically airborne—love is lost, new love is found, relationships are bent and broken by distance and time or by unrelenting proximity and timelessness. All the while, the line between autobiography and psychedelic fantasy is completely blurred.

“I like to write ‘scenes.’ I want you to be able to storyboard these lyrics into a visual, even the abstract part of them,” says Robinson. “We’re creating a world and we want people to come in. We’re doing it through language and this texture of music and melody. Sometimes it’s a celebration, sometimes its mourning. It can be anything once you get inside.”

The CRB’s evolution that led to ‘Servants Of The Sun’ stretches from clubs, to theaters, to the farms of Oregon and the fields of Marin, to sold out tours across Europe, to the annual summer festival circuit including LOCKN’, High Sierra Music Festival, Mountain Jam, Peach Music Festival and their own Freaks for the Festival in Big Sur—all coalescing at the band’s beloved multi-night stands at The Fillmore in San Francisco each December. The CRB were, in fact, a band born on the road from their very first days touring up and down the California coast in residencies in 2011 as they began to build a now mightily expanded international fanbase that might better be described as a tribe bound by music, fun, lifestyle and not just a little dose of obsession.

“Ultimately, our ‘freak family’ are the Godhead of this thing, they’re the ones that breathed life into a lump of clay and made the scene,” says Robinson. “It’s their involvement and their participation that gives this whole thing dimension and life.”

It is to the credit of the Chris Robinson Brotherhood’s musical naturalism that such a ferris wheel of themes, tones and characters can exist in the same fast moving air. With ‘Servants Of The Sun’ they’ve conjured yet another authentic statement free-flowing from their essential expression. In the effortless stream of storylines, hornet-stung emotions, and Kodachrome snapshot images rushing by, the listener hasn’t just landed in the CRB’s world and the joys and sorrows of their lives, they’ve also awakened in their dream. And as Chris Robinson sings, “sometimes a dream is to be believed.”

‘Servants Of The Sun’ is available now for pre-order.